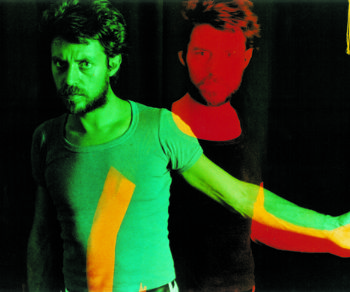 The Experimental self-portraits by Luigi Di Sarro on show at the Istituto Italiano di Cultura in New York. The multiple show curated by Marco Delogu will open on March 28.

This exhibition chronicles fifty years of Italian history showcasing a series of portraits, by 25 photographers, in which stories, identities and heritage are narrated by the looks of the subjects, eyes staring directly at the camera, at the authors of the shots and, ultimately, at all of us. Curated by M. Delogu.

Italy is a country rich in history whose borders have been rather fluid throughout time. A melting pot of identities, the DNA of its inhabitants is most varied  (with a diversity up to thirty times greater than the European average).

This wealth is reflected and it is recognizable in the features of the Italians.

The exhibit begins with a group portrait taken at Portella della Ginestra by Fausto Giaccone twenty years after the horrible massacre, followed by Gianni Berengo Gardin’s pacifist nudes, Gastone Novelli’s portrait of Ugo Mulas (two great protagonists of the ’68), demonstrations and factories by Francesco Radino, the work on Bagheria by Ferdinando Scianna, Tano D’Amico’s work in ’77 (a very Italian experience, stemming from the ’68).
Then a photo by Emilio Tremolada (engaged alongside Franco Basaglia in the battle for the abolition of the asylums), the work of Lisetta Carmi on “transvestites “, and self-portraits by Luigi di Sarro.

In the eighties the tone becomes more intimate with photos of the “Australian from Tuscany” Stephen Roach, belonging to the famous series dedicated to his wife Fabrizia, and the portraits of the neighbors of George Tatge, in Umbria.

From the nineties the photographic portrait becomes more and more a collaboration of two: the photographer and his subject work together for the final image using symbols, backgrounds and landscapes. It is the case of Guido Guidi’s portraits, and the photos of cardinals, peasants and Romani people by Marco Delogu, where the main focus is on the gaze of the person, while the environment is just a background.

Moira Ricci is even part of her mother’s photographs, is at her side, producing very moving images. Nature is present in the portraits of Sabrina Ragucci and Alessandro Imbriaco; Jacopo Benassi increasingly eliminates every background until he gets to the white, while Antonio Biasiucci chooses the classic black for characters that come out of the shadows. The exstensive overview ends with two portraits by Paolo Ventura, where the photographic technique is blended with ancient pictorial practices.