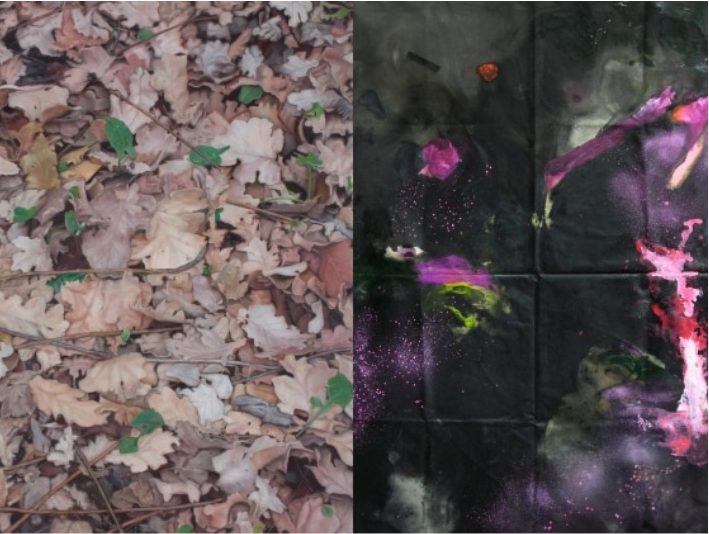 With FINITE / INFINITE, Elena Giustozzi and Caterina Silva show the work done during the ARP-Art Residency Project in South Africa. An exhibition that offers itself as a journey on many levels, not the simple notion of travel, but the will to observe from and with different points of view.

The slow walks in the nature of Elena Giustozzi are revealed in comparison with the gaze from the top offered by Boomslang, the suspended walkway of Kirstenbosh Gardens, but also in a sketchbook of digital sounds collected in various corners of Cape Town. Works done in Italy, in the Marche region where the artist lives, mix with the paintings painted in Cape Town. A work wich is  slow, meticulous, meditative, intimate and grandiose at the same time.

The vicissitudes of the soul of Caterina Silva, her continuous queries on the meaning of reality, and the language she would like to express it, are certainly in her large canvases, colored and wrinkled, but also in comparison with what the soul carries with its past far or near. And so, thanks to the meeting with the students of the Ruth Prowse School of Art the performance ticticfhsfhscoldcoldrainrain has come to life, and that continues a similar research just carried out by the artist in Norway. 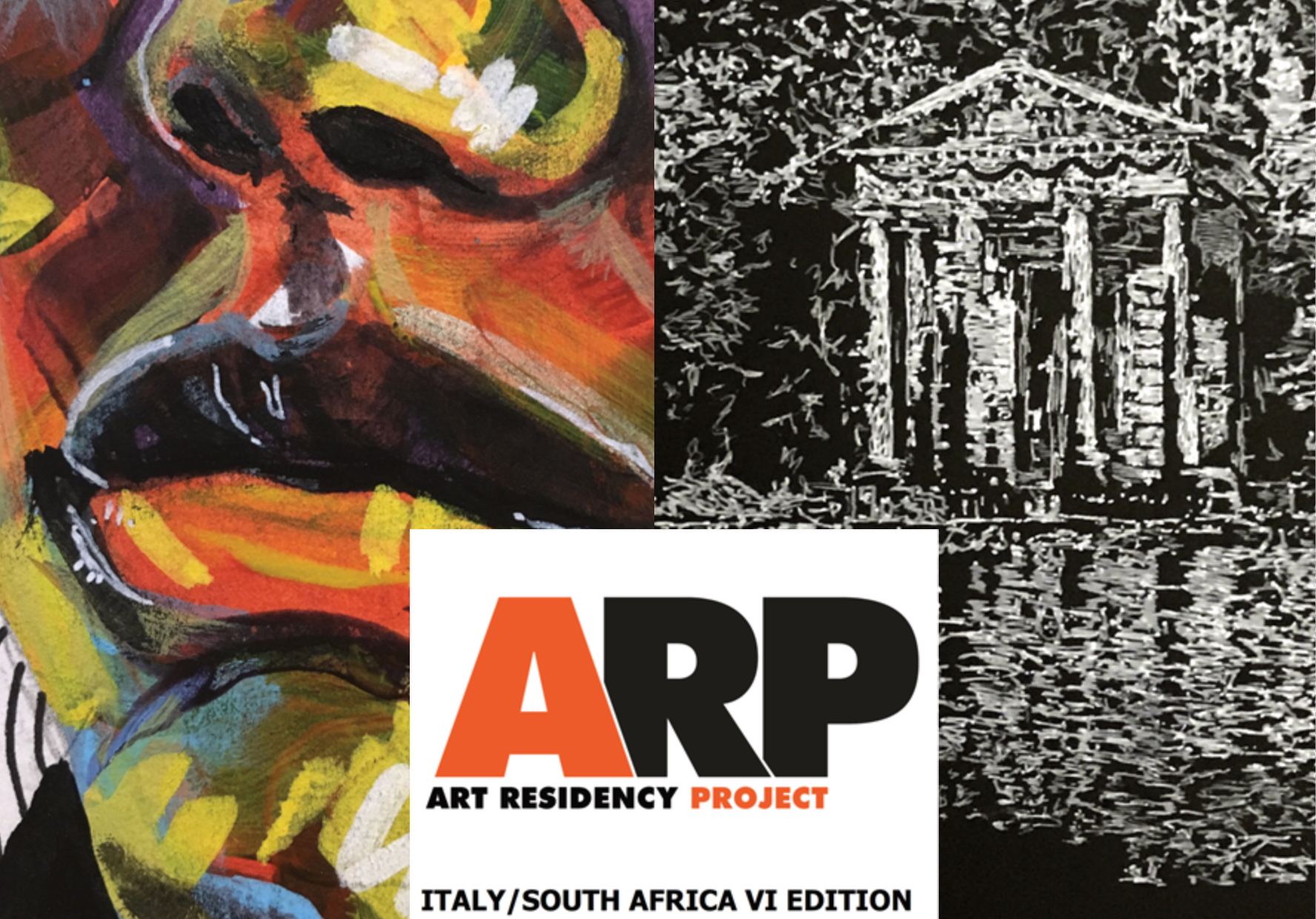 Jordan Sweke (1991) and Skumbuzo (Skubalisto) Vabaza (1987), from Cape Town to Rome thanks to ARP-Art Residency Project, will show their outlook on the City and its suburbs. People and landscapes, imagining realities: a journey that explores the present and the history of the Caput Mundi through various expressive media (painting, graphics and videos). The two South African artists produced artworks for this exhibition during the six-weeks residency period in Italy.

The ARP, a Bilateral Residency Programme for Young Artists between Italy and South Africa, is promoted by the CENTRO DI DOCUMENTAZIONE DELLA RICERCA ARTISTICA CONTEMPORANEA LUIGI DI SARRO and realized with the contribution of MAECI, Italian ministry of Foreign Affaires and International Cooperation, and with the collaboration of the Everard Read/CIRCA Gallery. In Cape Town, next February and March 2018, ARP will host italian artists Elena Giustozzi and Caterina Silva, selected to the residency programme, which will also see the collaboration of Ruth Prowse School of Art and Rainbow Media NPO.

Skumbuzo’s narrative is multifaceted (including visual art, design, music and fashion), he often incorporates contemporary figuration, imbued traditional iconography and several urban ‘graffiti’ based languages. Skumbuzo’s work aims to break down the human experience to its very core in order to expose the man made social constructs that serve to separate. His work is a bridge illustrating commonalities of consumerism, industrialization, corruption, hope, family, heart break, race , nationality and religion. His graffiti background and street art influence become obvious with his abstract use of colours and stylistic figure painting technique.
Jordan works within notions of the landscape and the natural environment. He abstractly explores ‘nature’ – a sublime and all-encompassing force. More specifically, he explores the relationship which currently exists between humanity and nature and ways in which this relationship might be reconstituted. His main focus of production lies in large oil paintings, but a rounded conceptual framework is achieved through his creation of photographs, sculptures, video works, print media and installation.
Both these young Cape-Town-based creatives have come together in ARP Rome 2017/2018 for IMAGINING REALITIES. This presentation comprises separate artworks, as well as collaborative work resulting from merging conversations between the two artists. At the Centro Luigi Di Sarro, Skumbuzo’s portrait paintings (in various mixed media) and Jordan’s landscapes (monochrome drawings, canvas based paintings and video work) are installed alongside collaborative linocuts and paintings executed together while in Rome on the ARP Residency.
The relationship between people and their environments is one of the major themes of the exhibition. IMAGINING REALITIES aims to address the notions of each person’s ‘reality’- how they see the world, and in contrast what goes on unnoticed around us all. Skumbuzo’s and Jordan’s active conversations illustrate and imagine what is taking place for many, addressing ideas of ‘marginalized poverty and the many unseen inhabitants of Rome’. This speaks about relationships between foreigners and the Roman landscapes, and serves to address “the social impact of immigrants, and the realities that lie behind the idealised ways people frame what they see and live.”
Skumbuzo and Jordan exist within the organic creative frameworks that pulsate around them in Cape Town, and both artists have an ongoing interest in periphery spaces and working-class areas. The ARP experience in Rome has served to ignite a joint conversation about the peoples in Rome, their ‘landscapes’ and the city itself. Although both artists actively acknowledge that this is a social commentary from an outsider’s perspective, they too feel ‘there are ridges of social and cultural similarities between Rome and Cape Town, that they both had been addressing in Cape Town. By creating some mural artworks in Rome  both Skumbuzo and Jordan hope to reimagine the reality of what is present there. In addition to their social commentary, the artists have endeavoured to critique the juxtaposition between nature and urbanization: the kind of relationship the people in Rome have with their natural environments, and natural selves. The artists have observed there are ‘remnants of human artefacts in nature, nature is surviving in heavily built up spaces, nature it feels is versus the city, and humans are versus nature’. The artists explain: ‘Rome is like a big breasted mother who feeds the whole of Italy. All of Italy is in Rome, not just Romans. One can almost feel Rome struggling under the pressure’. IMAGINING REALITIES, investigates this reality too and gives scope to see the world re-examined and envisioned through Skumbuzo’s and Jordan’s synergistic discourse.