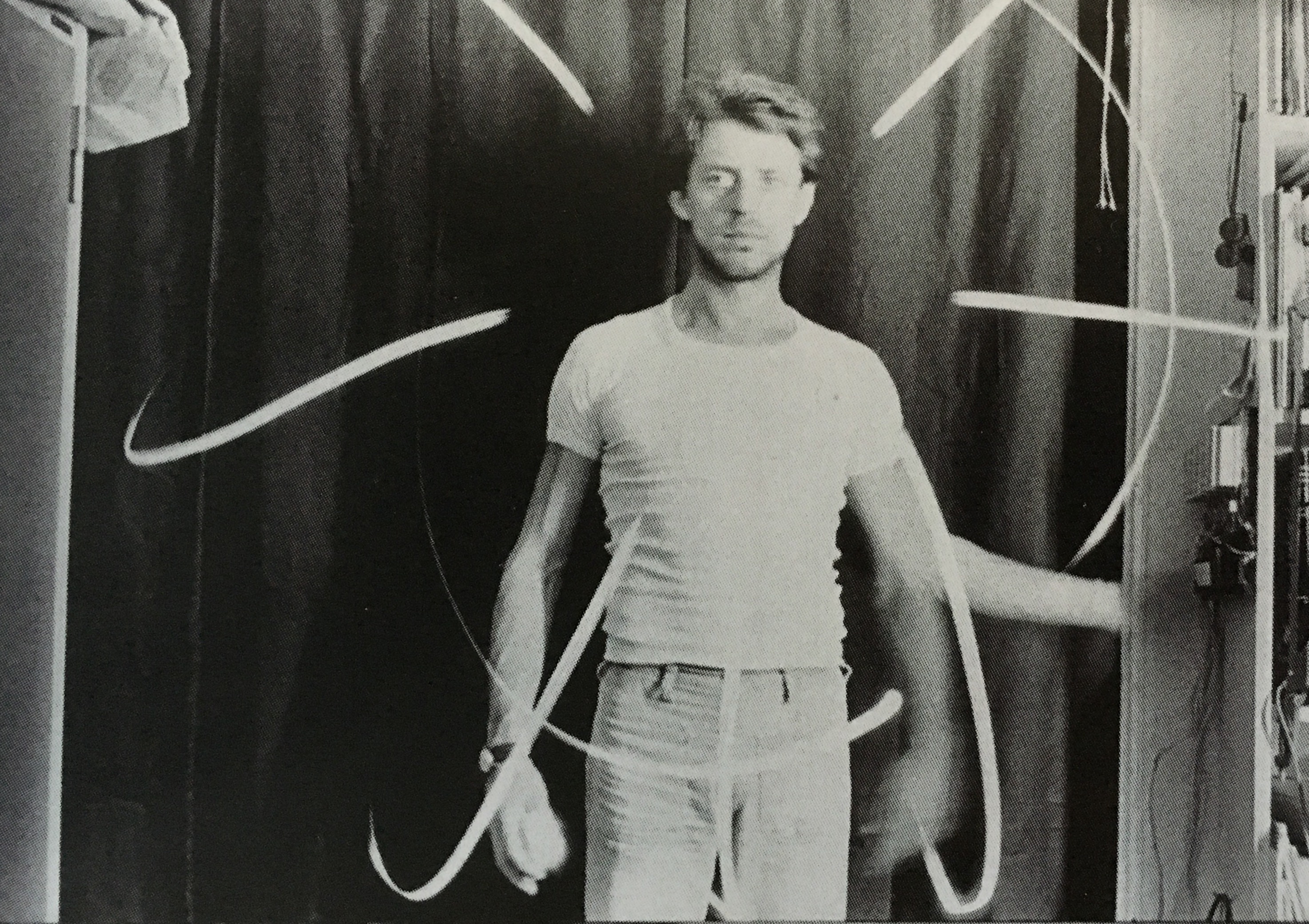 In the fortieth anniversary of the death of Luigi Di Sarro, the exhibition organized by the MLAC with Centro Di Sarro offers a glimpse of the production of Luigi Di Sarro between the 1960s and the 1970s, highlighting the transversal nature of his approach to techniques and materials and his characteristic conception of the “sign” as a generative element of shapes and spaces, without a real caesura between abstraction and figuration, evident both in graphic and pictorial work, and in photography and sculpture.

Di Sarro, avid experimenter in his artistic activity, has practiced drawing, painting, engraving, sculpture, photography and performance, focusing in particular on themes related to the body, movement, light and abstraction capacity of the sign and the geometric figures. Di Sarro died only thirty-seven years old, killed for a fatal misunderstanding in the tense climate of the years of lead in Rome, on February 24, 1979; he left a vast artistic production (paintings, drawings, photographs, sculptures, graphics, projects, notes, aphorisms). Works by Luigi Di Sarro are in several Italian and foreign public collections (including GNAM, MACRO, Palazzo Braschi and the National Institute for Graphic Design in Rome, Pompidou Center in Paris).</p>

Active since 1987, the Museo Laboratorio di Arte Contemporanea-MLAC, directed by Prof. Claudio Zambianchi, has been proposed since the beginning as a meeting place between the university and the contemporary cultural world, distinguishing itself for its vocation to research and training. Among the initiatives that have animated the program for thirty years, there are exhibitions, conferences, round tables, book presentations, festivals, video reviews and musical proposals, which aim at first hand to put in contact the most lively artistic and cultural realities of the moment with the students and scholars of the University, often coming to involve them actively. In the same way, the will to open up to the city is strong, involving all citizens through the proposal of a very varied program.
Exhibitions and events promoted and organized by the MLAC take place in the spaces set aside in 1985 by the La Sapienza University of Rome, at the Rettorato Building, in the heart of the University City.

On the occasion of organizing and carrying out the exhibition the MLAC offers a possibility of internship to students who have an interest in deepening in the field the craft of the historian and art critic in all facets. The internship foresees, in fact, an active commitment both during the preparation stage, with the possibility of working in close contact with the curators, and during the opening period of the exhibition, managing the guided tours, the reception of visitors and, last but not least , all the work related to the promotion of the exhibition, learning to manage the various online communication channels, from the blog to the main social networks. 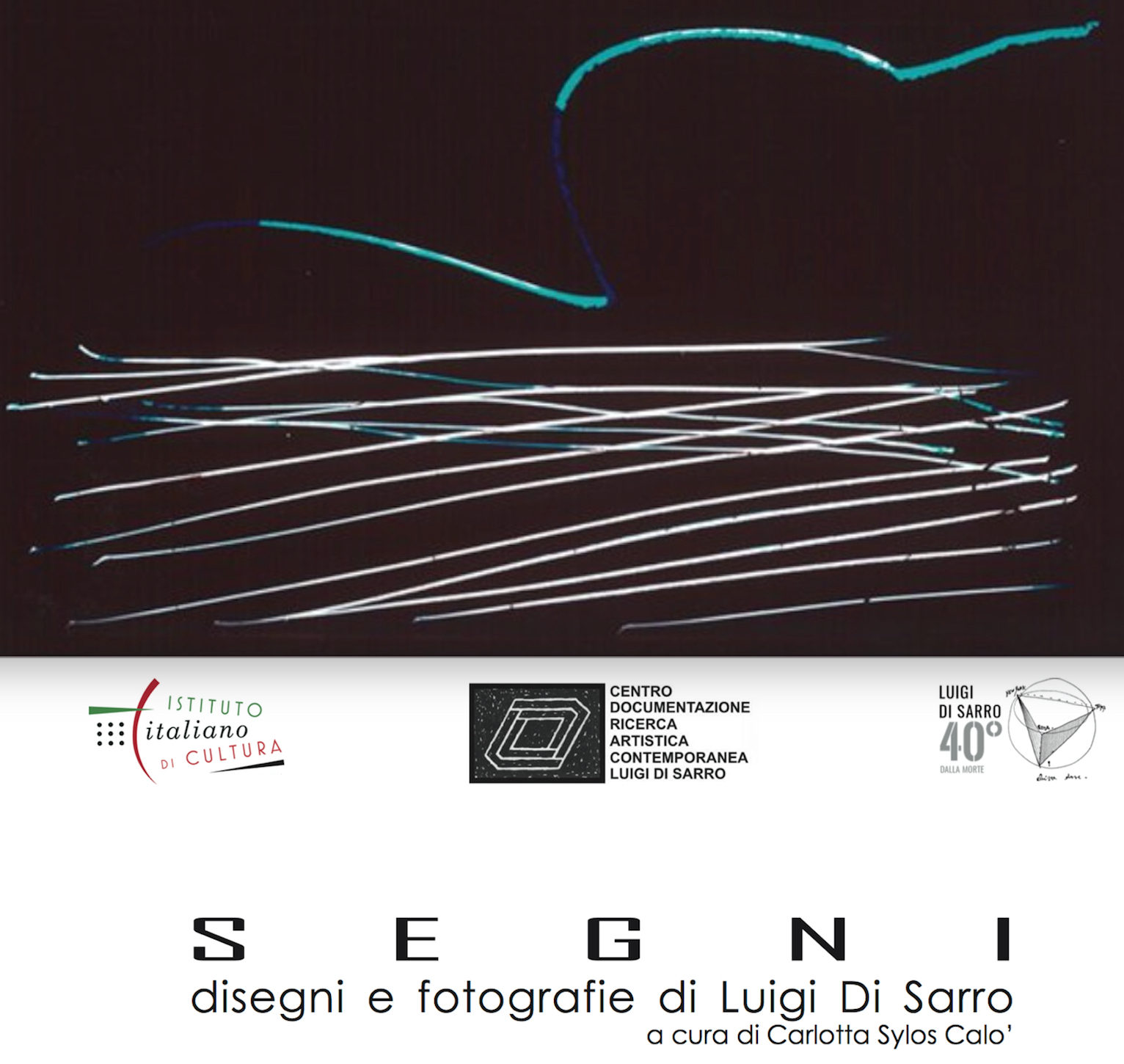 The celebrations on the occasion of the 40th anniversary of the death of Luigi Di Sarro go on with a series of events in Italy and abroad and the aim of spreading and deepening a multifaceted artistic production that is still considered highly topical today.

The tribute to Luigi Di Sarro, an artist active in the Sixties and Seventies – a period that is now being brought to the attention of the critics for the innovative pushes into contemporary art – wants to highlight his strong experimental vocation. An attitude and a need on the part of the artist who proceeded experimenting in all the fields and in all the expressive techniques with which he worked (besides photography, painting, drawing, sculpture and graphics). Italo Zannier writes in an essay on Di Sarro’s photographic research: […] but what is experimentation if not the result initiated by an idea? They are also the imprecise ‘photodynamics’ of Bragaglia as the ‘strobophotographies’, the ‘luminographies’, the ‘chronophotographies’, the “corporal” sequences of Luigi Di Sarro. These images are first of all results, not “trials”, as the “experiments” would be like. Experimentation is in fact implicit in doing and we do not know where it leads and when it will complete, if it will end; and woe, however, if we were to conclude, because every phase of it is already a result. […] Luigi Di Sarro – photographer, has realized his visual rite with an extraordinary expressive happiness, even lucid and dense but of irony, dramatic also, disturbing […]. (in I. Zannier, Luigi Di Sarro) Discovering Photography, 2001.)

In addition to the material kept in the Historical Archive dedicated to the artist, two substantial collections of photographic works are kept at the National Gallery of Modern Art and the National Institute for Graphics in Rome. Moreover, in 2009, some of the artist’s photographic works were acquired in the collection, and consequently also exhibited, in Paris by the Pompidou Center. The acquisition was curated by Quentin Bajac.

The ongoing archiving of the amount of work that the artist has left allows today to deepen and connect many issues, in the immediate not obvious. Numerous so far are the scholars who wrote about Di Sarro, who have studied a large part of his production, and many more are still under study. The occasion of the anniversary is to be a new and prolific opportunity to analyze a work that is increasingly revealed as a broad theorem argued in many directions, as if it were an encyclopedic atlas.

The exhibition SEGNI disegni e fotografie di Luigi Di Sarro curated by Carlotta Sylos Calò for the spaces of the Italian Institute of Culture in Warsaw and Krakow, in Poland,  is one of the many possible research about the links that Di Sarro studied and experimented. In the premises of IIC Warsaw are exposed some series of experimental photographs, a group of drawings and some etchings produced at the turn of the ’60s and’ 70s.

Di Sarro’s research, writes the curator in the catalog published by the italian Institute of Culture: “became radicalized in terms of his experimental approach – dictated in part by his dual profession, given that Di Sarro is not only an artist but also a physician – and matured in terms of his irreverent use of materials (netting, bitumen, iron rods, brushes, pencils, photography) that could bring out particular evocations in the forms he created. In this context, the sign in particular took on an extraordinary power to generate forms and spaces, still (but now more consciously) without any real caesura between abstraction and figuration, thanks to the enduringly transversal nature of his approach to techniques”.